Who is Most Likely to Get a DUI? 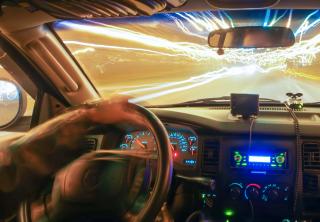 You may not think you know anyone who’s had a DUI but you almost definitely do. DUIs are unfortunately all too common in the U.S. – in 2012 alone almost 30 million people admitted to drunk driving in the U.S. Over a million people are arrested each year under the suspicion of DUI. That’s way, way too many.

Men are almost two times as likely to drive drunk. Over 15% of all males admit to driving drunk and men account for a vast majority of all DUI arrests.

A full third of all drunk drivers involved in fatal crashes each year are between 21-24 years old. That means college students, young professionals, and young parents are all highly likely to be charged with a DUI if driving drunk. Not only that, but physically, young drivers are even less capable of driving safely while intoxicated as older drivers.

Over five times as many alcohol-related accidents occur during nighttime hours than during the day. The less cars on the road the more likely you are to be noticed by the police and charged with DUI.

Some estimates say the average drunk driver drives buzzed or drunk a staggering 80 times before they’re caught. Despite that number, over two-thirds of all drunk driving charges are against first-time offenders (that is, people who have never been arrested for DUI before.)

Well, bad when under the influence of alcohol, anyway. If you think you’re a careful driver even when you’ve been drinking, you’re wrong. Take a look at this chart from Wikipedia that shows the most common reasons DUI suspects were pulled over in the first place: 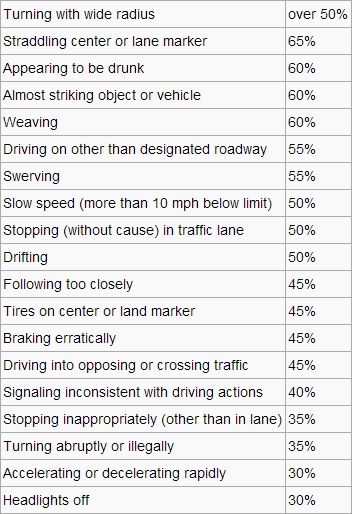 Think you’re not susceptible to DUI? If you ever drive after drinking – even if it’s just a drink or two – you could be at risk of getting a DUI. Don’t take the chance. Not only could you seriously injure yourself or someone else you could risk losing your license for a long period of time and facing thousands of dollars in fines, not to mentioned being ordered by the court to take a state certified DUI class.